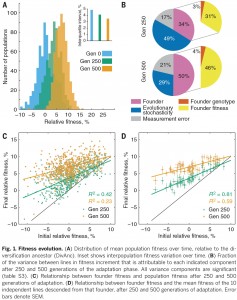 What does evolution look like? How much does genetic background influence evolution? Is evolutionary adaptability random or predictable? These are questions the Desai Lab has set out to answer. With a research focus on evolutionary dynamics, the Desai Lab observes evolution in action. To do this, the lab has designed experiments that allow them to quickly detect certain types of rare mutations, as well as identify which types of evolutionary processes are most important in practice, and measure important evolutionary parameters such as distributions of mutational and epistatic effects.

In June, the lab published a paper in Science detailing one of these experiments and its outcomes. Using Saccharomyces cerevisiae, a yeast common in baking, brewing, and wine making, the researchers started with 432 independent strains from a single yeast cell ensuring no genetic variation. The strains were placed in controlled environments and every 12 hours the fastest growing yeast colonies (i.e. the fittest), were extracted to continue their evolution. The experiment ended with 640 independent yeast strains evolving over 500 generations from the same parent cell. 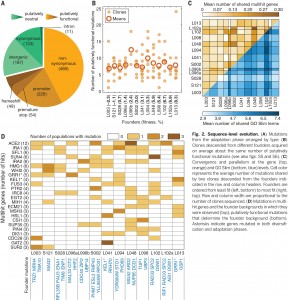 The results of the experiment showed that in a controlled environment, evolutionary contingency led to convergence rather than divergence at the fitness level. Simply put, while the various yeast strains did mutate in different ways, they all arrived at a similar evolutionary endpoint regardless of their mutations. Overall, the findings also supported the evolutionary theory of diminishing-returns, whereby beneficial mutations have smaller effects on fitter strains as there is less to improve upon. Where this research leads is anyone's guess, but it may push evolutionary biologists to shift their thinking from evolution's effects on individual genes to its effects on the whole organism.

The article “If the World Started Over, Would Life Evolve the Same Way?” by Emily Singer, which the above draws from, can be found at Quanta Magazine.