One of the great things about working at a university with more than 375 years of history are the stories you stumble upon. Markers of the past live on in tradition and in form. Here at Research Computing we are reminded of what came before every day we make our way through the doors of 38 Oxford Street.

For those unfamiliar with Research Computing's offices, they are located in a low profile, semi-circular building behind the glass behemoth that is 52 Oxford Street. If you weren't looking for it, you would probably never notice 38 Oxford Street. But if you did make your way to our building and went in through the front entrance you'd probably be struck by its strange architecture and layout.

The entrance doors don't lead to a common area or lobby, instead a ramp leads you through a long cinderblock hallway that seems more industrial than industrial-chic. At this point most people wonder if they are in the right place. For those that persevere and make it to the end of the ramp, they are greeted with another set of doors that open to two options: 1) stairs to the right that lead up and maintain the industrial flare and 2) another long hallway, this one curving like a crescent.

Most people choose option two because it looks more promising, like a normal office building. But as they make their way down the hallway, confusion settles in once again. While there may be offices, windows peer out onto a warehouse like environment. A giant crane hovers above. Forklifts whiz back and forth. Holding tanks huddle behind a cage. Building materials litter the floor. Many are left wondering what exactly is 38 Oxford Street. History holds the answer.

In 1956, with support from the U.S. Atomic Energy Commission, Harvard and MIT set out to build the Cambridge Electron Accelerator (CEA) at 38 Oxford Street. The project built a six billion electron volt machine (known as a synchrotron) used for electron physics research. At the time, the CEA was the largest of its kind. The synchrotron was housed in the curved, crescent shaped experimental hall which is now home to the Physics Fabrication Machine Shop and a helium liquefier on the lower level, Informatics & Scientific Applications' offices on the first floor and Research Computing's offices on the second floor. 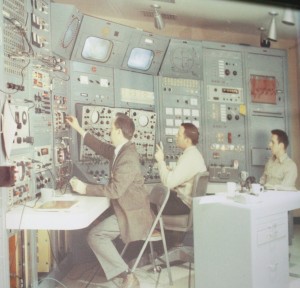 During the 1960s and early 1970s, researchers from Harvard and MIT used the synchrotron to break new ground in the field of high energy physics. Experiments with external electron beams led researchers to collide particles of equal mass and opposite velocities for the first time. This collision allowed the full energy of the collided particles to remain in tact and be free to produce new phenomena. This was one of the last major experiments conducted at the CEA. In 1974, the CEA was shutdown as better and faster accelerators became available.

Forty years later, the old CEA building is still home to ground breaking science, but this time it's the movement of 0s and 1s through the hallways. RC's equipment may be faster and more compact, and the control room a window terminal on a desktop, but our mission is the same: expand human knowledge through scientific inquiry. We'll continue to pass through the entrance to 38 Oxford Street like those before us in pursuit of the unknown.

← Journey to the server room
ACI-REF program kicks off at Harvard →
Loading Comments...