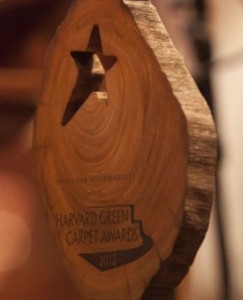 The Harvard Office for Sustainability has awarded the Harvard project team for the Massachusetts Green High Performance Computing Center (MGHPCC) a Green Carpet Award. The award recognizes Sustainability Leaders at Harvard who exemplify innovation and creativity through the development and execution of campus sustainability plans that focus on the reduction of energy use, green house gas emissions, waste, and water consumption.

The MGHPCC project team led by Eric D’Souza, Senior Project Manager for Harvard University IT, and James Cuff, Assistant Dean for Research Computing, won the award for outstanding management, vision, and collaboration in building New England’s first and only green high performance computing center. Located in Holyoke, Massachusetts, MGHPCC is a collaborative effort between Harvard, four other research universities, and the Commonwealth of Massachusetts to support computationally intensive research sustainably. The facility is powered by hydro-electricity and is LEED platinum certified. More than fifty percent of Research Computing’s compute is located at MGHPCC.

“The MGHPCC project was a true collaborative success between Harvard, Boston University, MIT, Northeastern University, the University of Massachusetts, the Commonwealth of Massachusetts, Cisco and EMC,” said D’Souza. “Within Harvard, many different groups contributed to the data center project coming in on-time, under budget, and becoming successfully operational to support important research computing,” he continued. “The 2014 Green Carpet Award goes out to all those at Harvard who have worked on the MGHPCC project over the last 4+ years to make it such a success. Thank you for your contributions and teamwork!”

“Without the support and dedicated involvement of The Office of the Executive Vice-President, Harvard University Information Technology, FAS Research Computing, the Office of the General Counsel, Financial Administration, the FAS Finance Office, Harvard Planning and Project Management, Harvard Public Affairs and Communications, Campus Services, and others, this project would never have been the great success it is,” added Cuff.

“In just nine months time of Research Computing going live with compute at MGHPCC, unprecedented research discoveries have been made using the computational power available at MGHPCC,” said Cuff. “For example,” Cuff continued, “researchers were able to confirm what happened in the seconds following the Big Bang. Not only is MGHPCC a model for sustainability and collaboration, it is also leading the way for revolutionary knowledge.”