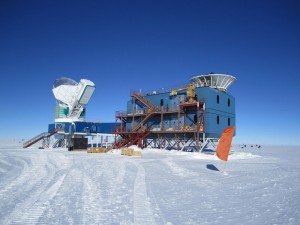 Of those 5.1 million CPU hours, close to 3 million were computed at the new environmentally sustainable MGHPCC facility in Holyoke, MA. MGHPCC compute, powered in part by hydro electricity, came online during the summer of 2013 and was the result of a collaborative effort between Harvard, four other research universities, and the Commonwealth of Massachusetts. The BICEP2 project was one of the first research groups granted access to the Research Computing cores hosted at MGHPCC. As part of the initial test group, the BICEP2 project had sole access to 28,000 cores for four days. Harvard’s involvement in MGHPCC is a centerpiece of its commitment to greening IT.

Once testing was complete in August, the project continued accessing Research Computing’s MGHPCC compute, closing in on 3 million CPU hours consumed over five months. In that time, the BICEP2 project processed an almost equivalent amount of CPU hours as it had over the previous three years using other Research Computing cores.

The project, led by John Kovac, Associate Professor of Astronomy and Physics and member of the Harvard-Smithsonian Center for Astrophysics, announced detection of B-mode polarization and gravitational waves providing insight into the universe’s first moments after the Big Bang. Albert Einstein’s general theory of relativity hypothesized the existence of gravitational waves, but until now they were never physically observed.

The project examined Cosmic Microwave Background (CMB), the oldest light in the universe, to discover signatures of cosmic inflation by detecting Cosmic Gravitational-Wave Background (CGB). The theory of cosmic inflation states that the universe underwent a violent and rapid expansion at only 10^-35 seconds after the Big Bang. Inflation, during the first moments of time, produced CGB, which in turn imprinted a faint but unique signature in the polarization of the CMB. It is this faint signature which led scientists to their discovery and the first solid evidence that inflation had taken place.

Papers detailing the findings, as well as data can be found here. For a quick overview of the findings please see here.