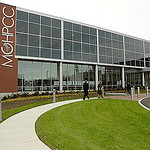 The Massachusetts Green High Performance Computing Center (MGHPCC), is a collaborative project launched in 2009 that brought together the public, private, and academic communities of Massachusetts, to build the nation's first state-of-the-art energy efficient computational facility. MGHPCC is the testing ground for the "greening" of high-performance scientific computing data centers and is located in Holyoke, Massachusetts. In addition to MGHPCC's green goals, the facility harnesses the computational power of the state's five most research-intensive universities (Harvard, MIT, Boston University, University of Massachusetts, and Northeastern University), establishing MGHPCC as the premiere high-performance computing facility in New England. By combining the computing power and storage capacities of these institutions, MGHPCC provides researchers access to a level of computation not available at independently operated universities.