Have you ever wondered why infants can learn foreign languages easily, while older children and parents struggle? Or why your third-grader can fix your computer, but you can barely check your email? The answer, scientists have long known, lies in the way brains develop. All children experience what researchers call “critical periods” —windows early in life when the wiring in their brains is more flexible than that in adults, meaning they are more able to learn new skills. Led by Takao Hensch, professor of neurology and molecular and cellular biology, and funded by a $9 million grant from the National Institute of Mental Health (NIMH), a group of Harvard researchers from the Harvard Center for Brain Science (CBS) and the departments of Molecular and Cellular Biology and Chemistry and Chemical Biology is working to map how that brain wiring takes place in an effort to pinpoint the causes of — and potential treatments for —schizophrenia, autism, and a host of other disorders.

The work — aimed at giving scientists a first-of-its-kind look at how the brain’s wiring is created, how it may go awry, and how it might be corrected — will take advantage of Harvard’s wide range of specialists.

“I would not have pursued this work if it weren’t for the unique environment,” Hensch said. “I came to Harvard because I wanted to work with the exceptional investigators that are here. This research represents a dovetailing of our interests — an unusual opportunity where these cutting-edge methods are assembled in one place at one time — something that could only be found here.”

Although he’s been researching the role critical periods play in brain wiring for nearly two decades, Hensch said technology now exists that will allow scientists to answer a question that has thus far eluded them: Exactly what is happening in the brain during this re-wiring process? 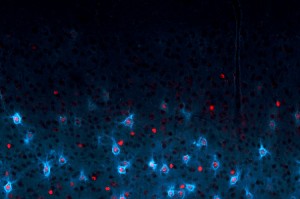 To answer that question, Hensch will focus on a single type of cell, the parvalbumin (PV)-positive GABA neuron, in the brains of mice. Though relatively sparse, the neurons are believed to play a key role in triggering the start of critical periods early in life. Impairment of the normal development and function of these cells can contribute to a variety of mental disorders, including autism and schizophrenia.

In earlier research, Dulac identified as many as 1,300 genes affected by “genomic imprinting” — the phenomenon of a gene having different levels of expression depending on whether it was inherited from the father or mother — many of which appear to be linked to autism and other mental disorders.

Understanding the precise role those imprinted genes play in brain development, however, is tricky. The brain contains dozens of cell types, including many different types of neurons. To study the entire brain, or even a single region, would require sifting through a vast amount of data in search of the few truly important results.  What was needed, Dulac said, was a focus on a single, critical cell type.

“As it turned out, Takao was working on this very interesting population of neurons, and he has demonstrated that the maturation of this cell type is particularly important, because abnormal development can lead to mental disorders,” Dulac said.

Using lab mice, Dulac will alter those imprinted genes and study how the changes affect brain development and the incidence of mental disorders.

To understand how those genetic changes alter the brain’s wiring, Hensch turned to Jeff Lichtman, Jeremy R. Knowles Professor of Molecular and Cellular Biology, and his “Brainbow” imaging technique. By tagging cells with fluorescent colors, the technique allows researchers to map the thousands of connections to and from each neuron. Lichtman is also developing a new electron microscopy method that will greatly speed the ability to draw detailed neuronal maps.

“What we are trying to do with this work is to better understand the way the central nervous system is organized,” Lichtman said. “We want to learn about the basic organization of these cells from a physiological, anatomical, and genetic perspective, and then compare normal and disordered brains to see if there is a difference.”

Also involved in the imaging is Xiaowei Zhuang, professor of physics and chemistry and chemical biology, who created STORM, a super high-resolution system of optical microscopy. Using the two imaging techniques, researchers will be able to study images of individual neurons, and see for the first time how the brain’s wiring changes in response to genetic alterations.

“We look forward to collaborating with Takao and applying new imaging capabilities to the study of parvalbumin-positive neurons and mental illnesses related to them,” Zhuang said. “This work provides an excellent opportunity for a number of exciting collaborations.”

Rounding out the team involved in the research is James Cuff, director of Research Computing for the Faculty of Arts and Sciences, who will help oversee efforts to process the vast amounts of data that will emerge from the project.

The result of work to study the genetics of the cells, visualizing their connections, and ultimately capturing the functionality of individual neurons, Hensch said, should be an understanding of how brains become incorrectly wired, and the development of therapies to reverse the damage.

“It’s a bit down the road, but we are optimistic that focusing on these cells will have an immediate payoff,” he said. “If we know how a cell’s connectivity starts out, and how it is supposed to end up, we can look at the disease model and trace it back to see where things went awry and how we might fix it.”

The grant also requires that researchers make a commitment to training the next generation of mental health researchers by involving students at many levels — even high school students – in the project. Building awareness of mental illness throughout the community is another aspect of the grant, one Hensch fulfills through his work with Harvard’s Center on the Developing Child.

“I’ve been fortunate to be part of the center, which brings together people from all the Schools to look at early childhood as both a window of opportunity as well as vulnerability,” Hensch said.

“I am convinced, as Takao is, that the development of an animal is a critical time for its brain,” Lichtman said. “In humans, it’s even more critical, because more than any animal our behavior is related to what we’ve learned. It’s a pretty safe bet that the thing that is changed by experience is the wiring diagram.

“If these were simple problems, we would already have solutions to most of the abnormalities of the brain,” he continued. “The fact that we have solutions to virtually none of them suggests how difficult this is.”

Copyright © 2011. All Rights Reserved.
Information about how to reuse or republish this work may be available at Attribution.