HOLYOKE – Friday, November 16, 2012 – Governor Deval Patrick and Lieutenant Governor Timothy Murray joined university leaders and technology executives today to cut the ribbon on the Massachusetts Green High Performance Computing Center (MGHPCC). The new Center will keep Massachusetts at the forefront of the innovation economy by enabling collaborative research on some of the biggest challenges facing engineering, science and society.

“Our investments in education, innovation and infrastructure have come together to support the creation of the Massachusetts Green High Performance Computing Center here in Holyoke,” said Governor Patrick. “This landmark project is a testament to what is possible when government, academia and business work together, and it will serve as an economic development model for the state and the nation for generations to come." The MGHPCC will anchor the new Holyoke Innovation District while setting a new standard for data center sustainability. The Computing Center has the capacity for 10,000 high-end computers and expansion capabilities in the building for an additional 10,000 computers. 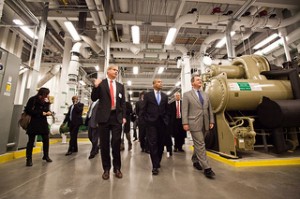 In addition to creating a platform for the growth of the state’s innovation economy and expanding the Commonwealth’s Big Data presence, the project illustrates the PatrickMurray Administration’s commitment to aligning infrastructure investments to support economic growth and new housing. The project employed nearly 400 construction workers, included $16.6 million in contracts with 12 local subcontractors or consultants and spurred new infrastructure and business activity in the area. Last week Lieutenant Governor Murray announced a $2 million MassWorks Infrastructure Program grant for a new train station in Holyoke along Amtrak’s Knowledge Corridor/Vermonter line that runs from Burlington, Vermont to Washington, D.C.

“The Massachusetts Green High Performance Computing Center is an indicator of the great potential of our Gateway Cities, including Holyoke, to be a leader in innovation and an anchor for regional economic growth,” said Lieutenant Governor Murray. “By collaborating with our partners in both academia and the private sector, we are apping into the region’s human capital while making advances to further position the Commonwealth as a world leader in the innovation economy.”

The $95 million facility, which was built on time and is expected to come in under budget, was supported by $25 million from the Patrick-Murray Administration, and was developed and will be operated by Boston University, Harvard University, the Massachusetts Institute of Technology, Northeastern University and the University of Massachusetts. Additional funding was provided by the Federal New Markets Tax Credit Program, EMC Corporation and Cisco Systems.

"The MGHPCC, along with the coming of the state’s Springfield Data Center, will reinvigorate the economies of Western Massachusetts and bring new life to two important urban centers,” said U.S. Representative Richard E. Neal. “I was happy to secure the federal government’s help in building the MGHPCC in Holyoke.” 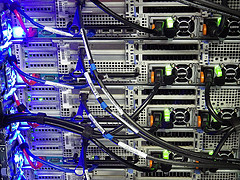 “The University of Massachusetts is excited to be part of the most significant public private-industry partnership in the Commonwealth’s history,” said UMass President Robert L. Caret. “The MGHPCC advances our commitment to western Massachusetts and to research that furthers the state’s economic interests. We are proud to celebrate this accomplishment and to move forward with the economic and R&D collaborations this project has already begun to inspire.”

“Each of the participating universities has a world-class research capability in its own right,” said Dr. Susan Hockfield, president emerita of the Massachusetts Institute of Technology. “By leveraging their combined research capabilities, the MGHPCC will enable us to take on the most complex and most pressing issues in engineering and science while participating in the renewal of Holyoke and the region.”

“Innovation is vital to the growth of our state and national economy,” said Jeff Nick, EMC’s Senior Vice President and CTO for Corporate Strategy. “The Massachusetts Green High Performance Computing Center is a testament to the state’s commitment to promote collaboration and innovation with industry and university partners. With an initial focus on cloud, big data and security, EMC is excited to see the groundbreaking research that will continue to propel the industry forward. EMC offers our congratulations on this game-changing facility.”

"The MGHPCC will harness the power of collaboration to drive forward the innovation agenda in Massachusetts,” said Larry Payne, area vice president, State, Local Government and Education for Cisco. “The facility will utilize new breakthroughs in technology to support the next wave of research and strengthen our regional science, technology and innovation leadership."

“Holyoke is glad to be a partner in a project that is so important to the economy of both our community and the entire Commonwealth” said Holyoke Mayor Alex Morse. “This project has catalyzed new economic development in our Downtown like no other project before it has done. We are proud of our contribution to a project so integral to the state’s economic future and excited about the possibilities it creates for the City of Holyoke.”

Earlier this year, the MGHPCC awarded $600,000 in seed grants to seven multi-university teams to work on subjects ranging from the marine ecosystem off the New England coast to medical imaging to the speed of computing itself. In addition, the National Science Foundation has awarded funds for a $2.3 million Major Research Infrastructure project to fund the acquisition and operation of a computer system that will be shared among several universities and support research ranging from fundamental studies of matter and materials to monitoring and measuring the health of the planet.

The MGHPCC has also helped generate funding for science, math, engineering and technology (STEM) education in the region. In September, Holyoke Community College, Dean Technical High School and the MGHPCC received a $200,000 grant from the Urban Research Park Community Development Entity to establish a Cisco Network Academy, which will offer training and professional certifications in the latest technology to help prepare students to fill the global demand for networking professionals. Through Cisco and the Computing Center, a “Smart and Connected Communities” program was established in Holyoke that creates a tele-presence and related educational equipment at Holyoke Community College and anticipates future projects with Holyoke’s Police and Fire departments.

Copyright © 2012. All Rights Reserved.
Information about how to reuse or republish this work may be available at Attribution.