The cloud. Everyone is talking about it even if they aren't quite sure what it is. And almost everyone is using it. To start, let's get that pesky definition out of the way. The cloud or cloud computing refers to the storing and accessing of data and programs over the Internet instead of on the hard drive of a personal computer. Companies like Google or Amazon host applications like Gmail or Cloud Player on servers that can be accessed through a web browser. These servers not only host the application, they also store all the data generated from interacting with the application. The clear benefit of the cloud for the average consumer is the ability to access and store various forms and amounts of media regardless of one's computational resources and location, and to share that media with the click of a button.

It is pretty easy to begin to see the value of the cloud if you are a traditional consumer of products offered by companies like Apple, Facebook, Google and the like. But what about the cloud's place in business or academia? How can the cloud help the professional class? Since we're at Harvard, let's focus on academia. Back in May 2013, the Obama administration issued an executive order titled "Making Open and Machine Readable the New Default for Government Information." This order, commonly referred to as the Open Data Policy (OPD) requires all publicly funded research and data to be made open and readable to the public. The majority of data from governmental organizations like the EPA or NOAA is available at Data.gov. Universities will also be required to make some of their data publicly available. As of 2009, the federal government supported close to 60% of the research performed at universities. Making this research available to the public in a readable and searchable format will require huge investments on the part of universities if it is managed in-house on local servers. 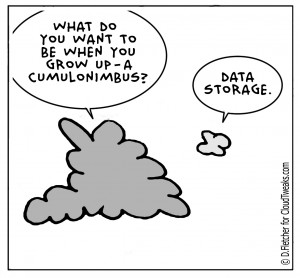 So what should universities do? Some will decide to keep their research and data stored and accessible only through their servers. This will give them more control over security. One of the most common downsides mentioned when discussing the cloud is lack of control over security. Organizations that use cloud computing services are totally dependent upon their service provider for security. If the provider cannot secure their servers, hosted data is vulnerable and the ability of the client to quickly react to security breaches is limited. However, many organizations are okay with the trade-off because of the numerous benefits the cloud provides. For academia, the trade-off may be worth it.

The cloud allows users from anywhere in the world to access resources through a simple web browser. By using cloud platforms like Amazon Web Services and Microsoft Azure, universities can ensure files are stored in one place at one persistent URL. The same datasets would no longer need to be housed on the local servers of various universities. This would free up storage and computational space, allowing universities to better focus their resources. With one access point through Amazon Web Services or Microsoft Azure, big data can be centralized and specific web-based apps could be developed and applied over these open datasets.

What can the cloud offer academia? For starters it can provide fast load times, scalability, automated application deployment, multiple back-ups and constantly updated hardware. The costs for this kind of always on, always growing, always up-to-date service can be prohibitive for universities under tight budget constraints. The cloud can replace the need for new data centers, which in turn can limit the expense of physical infrastructure, technology churn, and human capital. Other benefits include an alignment of university objectives to push knowledge and discovery forward.

Finally, one of the lesser noted benefits of the cloud is it's green. According to one study, cloud computing has the potential to reduce green house gas emissions by 4.5M tons across 11 countries if there is an 80% adoption rate. Using this formula, the total energy savings and emissions reductions of cloud computing can be calculated. As energy conservation becomes a bigger concern for large organizations like universities, cloud computing might offer a simple way to save resources.