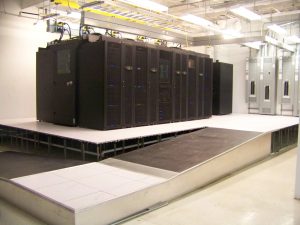 The Original Odyssey in 2008. Courtesy of Paul Arenas

Back in 2008, the Odyssey supercomputer was installed on the seventh floor of the Markely-Boston co-location data center at 1 Summer Street, Boston, Massachusetts.  Until this point Harvard had not really been a player in the realm of supercomputing, unlike other major universities who had been doing so for decades.  However with Odyssey Harvard suddenly appeared on the map, ranking at 61 on the Top500 with 4096 Intel Harpertown cores.

Research Computing was new at Harvard in those days, having been founded in 2007 (Michael Ethier and Luis Silva are current team members who were part of this original group).  Odyssey itself was half funded by Lars Hernquist's group at the CfA and the other half from the Faculty of Arts and Sciences.  With support from Dell, the RC team along with HUIT and the Markley Group built a machine with cutting edge capabilities that had not been seen at Harvard in years.  This triumph illustrated what the university could do if it pooled its computational resources rather than silo them off in different labs.  This early experience also formed the culture of Research Computing as being versatile, quick to learn, driven by researcher needs, and able to deliver at scale.  As FASRC's former director James Cuff put it, "We are the cowboys of IT.  Willing to do whatever normal IT groups won't."

Since that time Odyssey has gone through two different iterations, first with 28,000 AMD Abu Dhabi cores at the newly completed MGHPCC in 2013, then an addition 14,000 Intel Haswell Cores in 2017.  Finally in 2019 the cluster was rechristened in honor of Annie Jump Cannon and 32,106 direct-water cooled Intel Cascade Lake cores from Lenovo were installed which clocked in at 144 on the Top500 list. Amazingly those 32,000 cores that make up Cannon fit in the same rack space as the 4000 cores that made up the original Odyssey.  A fine illustration of the improvement in technology over the past decade.

Our group has also grown to 30+ people that support all the work being done on the cluster.  Whereas in 2008 Harvard was a newcomer, now in 2020 Harvard is a major player in high performance computing with a history to back it up.  Even as our team has matured though it has kept that original ethos of being driven by the needs of the world class researchers at Harvard.

So as we bid adieu to our seventh floor data center space at 1 Summer Street and move in to our new shared digs with HMS RC on the fifth floor, let us give thanks for the shoulders of those who came before on whom we stand.  We are looking forward to an exciting future of Research Computing at Harvard, as the best is yet to come.

← Congratulations to Madelyn Cain for JobID 1!
2020 Year-End Recap and a Look Back at FASRC →
Loading Comments...